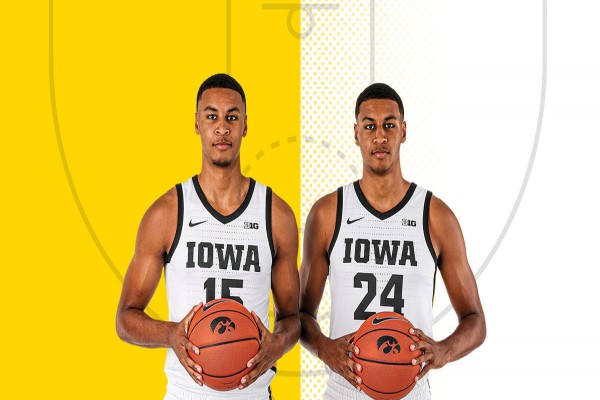 Watching your brother go on and make an NBA roster could be one of the best feelings in the world, especially if that brother is your best friend. So, even though Kris Murray stayed with the Iowa Hawkeyes while his identical twin Keegan is now with the Sacramento Kings, there’s no jealousy or hard feelings between the two.

But that doesn’t mean that Kris isn’t keeping notes and getting ready for when his time comes. Keegan was taken fourth overall by the Kings and has shown glimpses of greatness in his first couple of weeks in the Association and will not be a major surprise if he gets added to ClutchBet list of best Iowa Hawkeyes basketball players of all time in the future.

Kris, on the other hand, has taken a step forward as a starter for the Hawkeyes, proving that he can also be a star.

“If you ask Kris anything, he doesn’t care where Keegan is being projected, because he will say that he can beat him one-on-one,” their father Kenyon said before the NBA Draft. “I think if you ask each one of them who’s better, they’ll probably say themselves. But I think that’s pretty cool, because they always push each other and try to make each other better.”

That confidence remains intact and judging by his skill set and how his brother has fared thus far, there’s no reason to think Kris Murray can’t get a shot to make it to the NBA, even if it’s as a second-round pick or an undrafted free agent due to his age.

They Struggled To Get Noticed

The Murrays didn’t get a lot of nationwide attention fresh out of high school. If it wasn’t for his father’s history with the Hawkeyes, chances are the Hawkeyes would’ve never noticed them. Fast-forward to today, and they’re two of the best players in recent program history:

“I think a small part of the hesitation of some schools was having the perception that they had to give up two scholarships for essentially the same player,” high school coach Jeremy Rickertsen told the Daily Iowan. “I think most schools, even though if they asked, we would tell them differently, just assumed they were a package deal.”

But Keegan Murray is averaging 12.0 points on 45% shooting in the NBA, showcasing his sharpshooting and rebounding skills night in and night out, and he’s only getting better. So, if you’re telling me, there’s a chance you can get another guy like him for my team, who in his right mind would say no?

Kris has hit the ground running for the Hawkeyes, also. He’s averaging 18.0 points, 7.0 rebounds, 2.0 assists, and 2.0 three-pointers per game on 63.2/44.4/100.0 shooting splits, proving that he can also be an efficient and productive player at the pro level and making the Wooden Award and Karl Malone Award shortlist.

There aren’t all that many combos forwards or guys their size that can knock down threes at the same clip at the Murrays. So, regardless of his age, Kris should get a shot to prove his skills in the NBA, especially if Keegan continues to impress with the surging Sacramento Kings.


Another Identical Twin Duo In The NBA

Like most identical twins, Kris and Keegan have been inseparable since day one. In fact, this is the only time in which they’re not actually teammates.

“It’s like having a built-in best friend,” Keegan told the Daily Iowan before making it to the NBA.

So, don’t you worry, Keegan,  it’s just a matter of time before the best friends are reunited, maybe even on the same court, just like it happened with the Morris, Van Arsdale, and Grant twins for years.