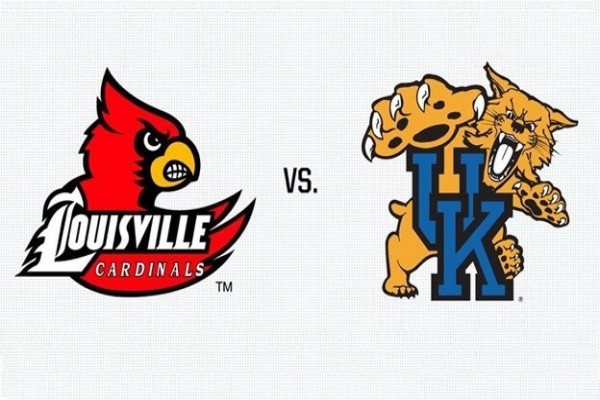 The Kentucky Wildcats and Louisville Cardinals have been locked in a rivalry for over 100 years, offering fans what’s known as the Kentucky-Louisville rivalry.

It’s one of the most passionate rivalries in college sports, particularly in men’s basketball, made even more hotly contested because of how close the two schools are to each other. Bleacher Report has named the Kentucky-Louisville rivalry the third-most bitter in all of college sports and Hall of Fame commentator Dick Vitale also ranks it as such.

“It is a sea of blue and a sea of red in the stands. Kentucky basketball fans are the most passionate in all of college sports and big blue nation cannot wait for the annual showdown,” Vitale wrote in 2012. “It has been magnified further with the coaching battle between Rick Pitino and John Calipari. It has been special seeing the Bluegrass State divided, rooting for these two potential powers.”

Vitale ranked the Duke-North Carolina basketball rivalry as the No.1 in college sports, with Ohio-Michigan coming in second place.

The Wildcats and Cardinals played each other for the very first time in 1913 but their games stopped in the 1920s and, between 1913 and 1983, they only played 12 times. There was really nothing to the rivalry until they met in the 1983 NCAA tournament. They’ve been meeting in late December or early January since then.

The sides are set to clash on December 22 this time around. The odds favored Louisville in the last match among the best sportsbooks and they were good for the victory. They’re still 20 games behind in the interstate rivalry, however, with the Wildcats claiming 37 wins to their 17.

The competition is fiercer as both schools have been among the best in NCAA basketball for the better part of the last half-century. They’re also the most successful programs in college basketball - Kentucky is No.1 on the list of all-time winningest programs in Division I basketball while Louisville ranks at No.6. The former has eight national championships and the latter has three, with the NCAA vacating one of them.

Kentucky has had 46 players selected in the first round of the NBA Draft, Louisville has had 24 players do the same.

While the aforementioned factors contribute to the rivalry between these two teams, things really became heated when Rick Pitino was hired as the head coach of Louisville in 2001. Pitino had coached Kentucky from 1989 to 1997. The New York native, now head coach at Iona College, stuck around until 2017 and, within that time, the Wildcats claimed 12 victories over the Cardinals while Louisville won six times.

The Wildcats played the Cardinals in the 2012 Final Four and Kentucky emerged advantageous with a 69-91 win that spurred them on to the national title. That was the furthest the two teams have met in the tournament since their first in 1984.

As it turns out, the women’s teams will clash this weekend. The 7-1 Cardinals will be intent on extending their seven-game winning streak against the 6-2 Wildcards when they square off against the Wildcats on Sunday. Louisville is fresh off a win against Belmont 80-66, with Hailey Van Lith scoring a team-high 16 points.

Kentucky, meanwhile, lost to DePaul 94-85 in their last game though Robyn Benton registered 22 points to lead her team in scoring.

Although men’s basketball is what stokes the rivalry between the teams, there’s still something to be said for football. The football rivalry actually started a year before the basketball rivalry and was also non-existent for several years. The teams first played each other in 1912 and Kentucky went on to dominate the head-to-head, winning six games between 1912 and 1924 before the teams stopped playing each other.

The competition was revived in 1994 after former Kentucky player Howard Schnellenberger went to coach Louisville. The Wildcats lead things 18-15 but the Cardinals have the lead in the Governor's Cup series at 15-12.

The annual game was Kentucky’s first of the season from 1994 to 2006 and was also the first for Louisville for 10 of those 12 years. The matchup was moved to the third game of the schedule in 2007 when played in Lexington but stayed as the first when played in Louisville. The Governor’s Cup became the last game of the regular season for both teams to go up against each other around the same time as other ACC-SEC interstate rivalries in 2014.